With an Inverted Yield Curve, Is it Time to Worry? 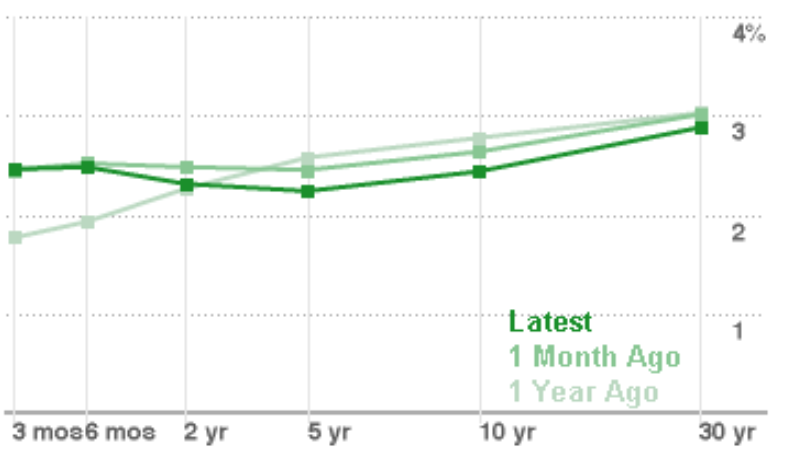 There’s almost zero chance that you missed the alarmist headlines on Friday about the inverted yield curve, which (you probably also read) inevitably signals an upcoming economic recession.  So the smart move is to retreat to the sidelines until the economic bust is over, and get back into the market once the yield curve has developed a healthy steepness.  Right?

Investors certainly thought so.  The S&P 500, on Friday, dropped 1.9%, as people reacted as if a recession would happen on Monday.

It would be nice if investing were that simple.  But in the current case, it is much further from simple than normal.

The yield curve is a line plotting out the interest rate (yield) that is paid to investors across maturities, from three month to 30 year.  An inversion happens whenever the shorter maturity bonds provide higher yields than longer-term ones—which is counterintuitive since the risks of holding bonds longer-term are greater than if you’re parking your money for a few months.  Longer-term, you could experience inflation, default or a rise in interest rates that will make you look stupid for committing your money at a particular rate for 10 years or longer.

This current so-called “yield curve inversion” really looks more like a flat line stretching from short-term to intermediate-term bonds.  What was widely reported was a (probably brief) moment when the 3-month Treasury note offered higher interest than the 10-year bond—by (get ready to be shocked) 0.022%.  You could see roughly the same spread difference around the beginning of 2006, which was not a very clear signal and did not result in a recession until a year and a half later.  Some months afterwards, the yield curve inverted with a vengeance, although it righted itself before worst carnage of 2008.

The lesson here is that, yes, we have experienced a yield curve inversion sometime before each of the last seven recessions.  However, there have also been two false positives—an inversion in late 1966 that was followed by economic growth, and a largely flat curve, like the one we are experiencing now, in late 1998 that also didn’t presage a recession.

Moreover, even if we accept the idea that a yield curve is a recession signal, the actual timing is almost impossible to predict.  Data from Bianco Research has shown that over the last 50 years, a recession followed, on average, 311 days later—roughly a year.  This is an average of some pretty broad fluctuations.  Following that brief inversion in 2006, the economy didn’t experience recession for another 487 days.  An inversion in December of 1978 was followed by a recession—389 days later.  In contrast, it took just 213 days for the U.S. economy to enter recession territory after a July, 2000 yield curve inversion.  Based on this evidence, selling the day after an inversion seems like a poor strategy.  Selling a month, or six months after doesn’t make sense either.

Finally, some economists think that the yield curve is not nearly the accurate signal that it once was.  The reasons are a bit technical, but they have to do with the increasing control that the central banks—including the U.S. Fed—have on the shorter end of the yield curve.  The Fed and other central banks have been buying up government bonds for their balance sheet, which means the shorter-term yields can no longer be seen as market driven.

So what IS an accurate signal of upcoming recession?  There are some tried-and-true signs, including an overheating rate of GDP growth (which we haven’t seen at all in this long, slow recovery), rising unemployment (nope) and spiking interest rates (no sign yet).  Another sign that directly impacts the yield curve is a sudden demand for longer-term bonds as a safe haven for nervous investors, causing the bond rates to drop below shorter-term paper.  There has been no indication of a shift in demand for bonds over stocks.

So what does all that mean?  The simple lesson is: don’t fall for clickbait.  We are still as much in the dark about what the economy and markets will do in the future as we were before 3-month Treasury bills returned a shocking 0.022% more than 10-year Treasury bonds.  We might experience a recession this year, or next, or in 2022.  All we know for sure is that we WILL experience one, possibly with a few unexpected market ups and downs in the meantime.