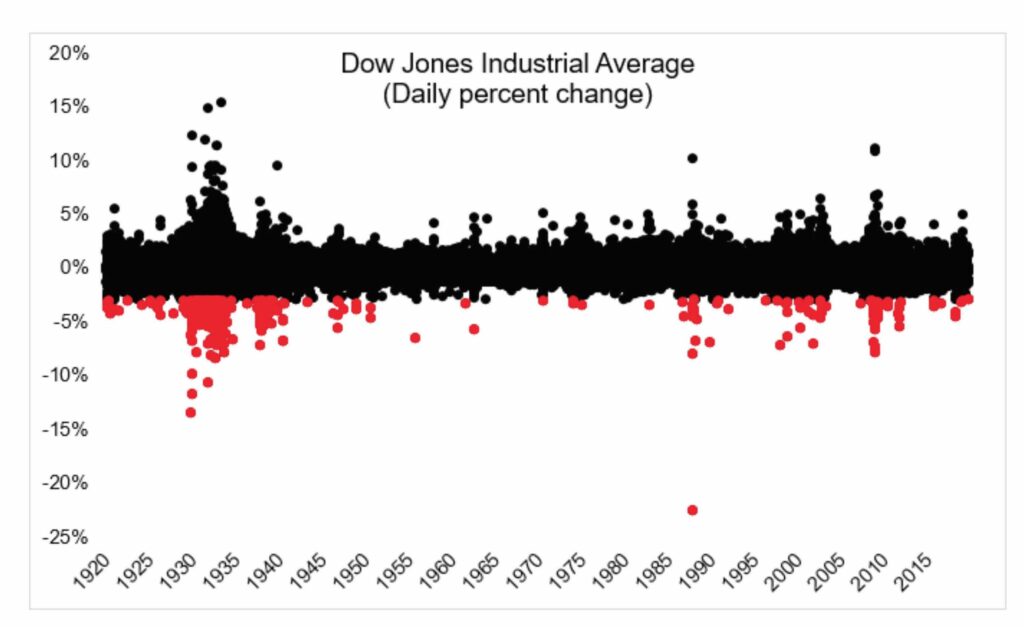 Even though, statistically, this kind of thing happens about three times a year, we never really get used to it, do we? None of our clients have called me today regarding yesterday’s market action, but when we speak to our clients to review their portfolios and assess our long-term strategies, we can tell that the topic of market volatility is never far from their minds.

Market volatility is likely to continue in the coming weeks and months. Last week, headlines indicating an elevated risk of an all-out trade war between the U.S. and China sent the markets down by about 3%. A couple of days later, the markets ran back up by about the same amount on news that President Trump had decided to delay some of his planned tariffs on Chinese imports. Yesterday, news of the inverted yield curve in U.S. Treasuries, widely regarded as a signal of an oncoming recession, sent the markets down again. Tomorrow’s headlines — who knows? But the market is behaving exactly as markets always do: It is effectively and efficiently setting prices according to all the known information.

Keep in mind, that a little downward adjustment in stock prices is not necessarily a bad thing. We have enjoyed a 10-year economic expansion, and during that time the stock market has nearly tripled in value (from DJIA 9,506 on August 21, 2009, to 25,479 today). Especially considering the current world trade environment and the interest rate concerns, some headwinds are to be expected. Downward pricing adjustments help to build a base from which prices can advance further. Also, stock prices have historically struggled during the third quarter of the year, as an article in Barron’s points out. That could certainly be an additional factor in the volatility we’re currently seeing. And never forget: For every stock that was sold today, there was a buyer who believed that owning that stock at that price represented a good value.

Also remember that an inverted yield curve is not necessarily a sign of an imminent recession. In fact, former Federal Reserve Chair Janet Yellen suggested yesterday that this particular yield curve inversion is not likely to signal recession. Many technical factors impact bond prices and yields, and Yellen points out that there are many factors currently affecting long-term yields that may have nothing to do with the underlying strength of the U.S. economy. Bond prices fluctuate, just as other assets do, but there is nothing on our screens at present to indicate a meltdown in the bond market or that a recession is unavoidable.

Admittedly, we are concerned about the current leadership of the Fed being a bit too hasty to ease interest rates. A few days ago, they announced a 25 basis-point lowering of rates, and some hoped that would stimulate the markets. But in our view, it’s like that first glass of champagne; you never really get the same kick with the second, third, or fourth glasses. Similarly in our view, the Fed shouldn’t automatically push the “lower rates” button just to jazz up the stock market. Instead, we need to allow the current trade situation to settle out so that financially stable, well-run companies can continue to do what they do best: create value for investors and the economy.

In the meantime, don’t forget: It’s still all about the basics — diversification, rebalancing, and a disciplined long-term strategy. If the current market mambo is concerning you, then let’s take a look at your asset allocation to see if adjustments are called for. But now is not the time for knee-jerk responses.